Genevieve Tsai is perhaps one of our most experienced contributors. She has been in the entertainment industry for over 12 years. She began designing for the Workshop 3 years ago under the handle “Lady Bane,” and has been creating awesome plushies with us ever since. She’s an avid collector of toys and collectibles themed around her favorite games; you can tell that she really understands what makes a great plush. I had the pleasure of interviewing the energetic Lady Bane and got a peek into the process of making this year’s Blind Box Micro Plush.

We are really excited to have you as part of 2017 contributor spotlight!  For those who don’t already know you, could you tell us a little bit about your background?

Hello and thank you so much for having me--it's really an honor to be featured here! My name is Genevieve Tsai and I've been both a full-time and freelance Character Designer in the games and animation industry since 2005. I've been drawing ever since I was a kid and love geeking out over cartoons/anime, games, toys, animation artbooks and European comics!

Some of my clients include EA, Riot, Blizzard, Google, Intel, Hasbro, Spin Master, Bento Box, Ghostbot, Zynga, ReelFX, Illumination, DisneyToon Studios and, of course, collaborating with you wonderful WLF peeps for the Valve Workshop! I also teamed up with Jessica Steele-Sanders and Chris Sanders as an interior illustrator for their novel, "Rescue Sirens," back in 2015. It's been a fun ride working on such a variety of different projects!

Currently, I've been working on a personal project that I'm really excited about: a new artbook entitled, "Cherry Hijinx." I hope to reveal more about it soon!

So how did it all start?  How did you become a Dota 2 fan and what got you started in the Workshop?

My boyfriend at the time got me into it, and we were addicted to it, playing nightly with all our friends. I admit I still have so much to learn, game is hard, haha! But there are only a few games that truly get my adrenaline pumping like a close match in Dota! (The other two being Monster Hunter and Street Fighter!)

What really hooked me in and kept me intrigued was the characters, actually! Dota 2 has such excellent character voice acting and SO much dialogue for every situation! The subtleties of cadences in each hero's voice, the writing of the dialogue and the way each line was executed, all reveal so much about the hero's personality and backstory. Such was the case for Timbersaw: when I heard all of his lines, it was instant love! I was like, "That's it. I'm only maining Timbersaw. I'm only playing each round JUST to pick Timbersaw!" So, I kinda got a little bit obsessed with making fanart/fics of this crazy keen, haha! As for the Workshop: from the beginning, I respected and appreciated Dota 2 as a sophisticated and polished MOBA, how it's always in flux--refining, re-calibrating and evolving with every patch. And often these updates are huge, not just per hero: new modes with drastically different gameplay, completely new UI, reskinned maps, game-changing items, etc.

One powerful feature that is unique to Dota vs other MOBAs, is the Steam Workshop. Discovering the community of Workshop Artists and their amazing sets, couriers, items, emotes/UI, music, etc., was super inspiring to me! These contributors play a huge role in keeping the characters aesthetically fresh and interesting (and I will happily upvote and excitedly collect every Timbersaw set and item out there!), and many of my friends who are in it are making a good living doing it professionally full-time. So as an artist who was new to the Workshop (and in many ways I still am), this was all very enticing to me when I started out!

I began by entering a "The International 2014 Call for Entries" for Dota t-shirt designs back in 2014. I've always wanted to make a Timbersaw shirt I would wear as a Timber fan, so I threw in a couple of designs, as well as a Lycan one. I also made a 2D animated Timbersaw commercial to help promote those designs. It was fun designing shirts, so I entered the WLF Team Fortress 2 contest as well with my "Pyrodouken" design and ended up being a finalist! The following year I finished "Techies VS Jakiro" and submitted it as an in-game loading screen for New Bloom. Despite not making it in, I was happy to have made a lot of great friends in the Workshop over Twitter and Steam after releasing it. "Techies VS Jakiro" ended up being one of the winners in the WLF New Bloom Contest as a print, and around the same time I was also approached to design the Dota 2 Micro Plushies for Series 3 as well as the packaging art. I learned so much about making plushies after this experience, which I'll get into more later!

This year you worked on the Series 5 Blind Box Micro Plush! Thats BIG! Could you tell me about the project and how you approached it?

Being a huge fan of the game and knowing that us fans love collecting anything Dota, I felt SO honored and ecstatic when I was first asked to design Series 3! I hadn't designed plushies before, but it was an exciting challenge, and I was determined to make improvements with every iteration. I approached it by asking myself, "How would I as a fan want these to look?" In terms of quality, I wanted fans to feel like the artist took care in the details of the costume and proportions, and took in consideration the personality of the Hero to make fitting and appealing facial expressions, despite the simplicity. It's like commissioning someone to do a plushie of your favorite character--how would you, as a paying fan, want your plushie to look?

Your style of art is very animated and you put a lot of detail in the character designs you come up with.  But plush is a very simplified representation of a character.  What was your process like and what were some of the challenges you were faced with?

Thank you! Yes, to elaborate, I had to look at the heroes in a different way. The heroes are so detailed, I was constantly examining the models in-game, or use the (sadly now defunct) DotaHattery, and currently the D2 Armory. I needed to interpret these details into a super-simplified, 2D chibi version from all angles, while simultaneously taking into account how these would result as three-dimensional plushies. So I would 'call-out' all the details with larger references, templates and clear instructions. In addition, I had to take into consideration the short deadline, budget limits, and how to efficiently communicate with Valve, the plush prototyper (Arixystyx, who I worked with for Series 3 & 4), and the factory with just one set of model sheets. To get a nice result takes major checks and balancing on all levels, so I really appreciated that for Series 5, WLF (Jorge specifically, he's awesome) would send me plenty of photos of the plushies straight from the factory where I could do a paintover and direct changes back to the factory for the next round of approvals. It would've been lovely to have used this process for Series 3 & 4, but it was an excellent learning experience.

The ability to iterate is super important to making these look as I envisioned, because you can guarantee that what you design in the model sheet is not going to turn out perfectly as you imagined it in the first shot! Some of the prototypes for Series 5 (as well as the Timbersaw plush) have undergone three or four paint-over iterations. Because I care so much about the quality, I wish we had time to do even more, but we also have to hit hard deadlines. Stylistically, for Series 3, I was allowed to do my own take while still taking into consideration the previous style from Series 1 & 2. For Series 4, I could integrate a lot more of my own style into it, adding more detail and playing with different types of body structures (Ricky's satyr legs and Enchantress's deer body, for example), while also giving a LOT more information and instruction in my model sheets.

However, all the detail I was putting in was making the microplush... not so micro! It was a challenge to meet that sweet spot between quality, time and budget. So for Series 5, we discussed a different approach, something much simpler, but still appealing. What was the minimum amount of information needed to convey the idea of the hero? What details could be cut to save time and cost without sacrificing the appeal and quality of the plush?

Which character were you most excited to work on?

For this series, Omniknight! I am a huge fan of Sir ActionSlacks who loves Omni, so that was my first choice of heroes to make, as a sort of tribute to Slacks. I loved his Immortalis alternate Omniknight voice pack demo (and still hope that one day it will make it in the game!) so in the first concept of the plush I gave Omni this crazy-aggro expression based on his voice pack, although later I had to change it to a more stoic demeanor to fit the original Omniknight's personality. It was worth a shot, haha!!

Of course, the character I was most excited to work on overall from Series 3 and on, was the large Timbersaw plush that debuted in TI6! I've always wanted a Timbersaw plush of my own, so WLF practically made my dreams come true!

What’s the best part of being a merch designer?

One thing, is the possibilities and the accessibility--I love that if fans can dream it, WLF can make it. It's amazing, basically having a factory prototype straight from your imagination! Without WLF, I would be overwhelmed with trying to find a factory willing to prototype my designs, allow me to iterate, then mass-produce the items within an extremely limited budget. On top of that, I would need to build or find a platform to market and sell the merch. Oh, and not to mention the fact that I would need to negotiate a seller's license with every company from which I'm basing my fan merch on! The whole process would be incredibly difficult and time-consuming to manage for just one artist like me! But WLF bridges that gap for us, the creative fans, and makes it easy for artists to make what we want happen!

Another part I enjoy, is that there's something just SO cool about seeing my artwork of these characters I love, materialize into a tangible plush, a t-shirt, and more... and it's even cooler seeing others get hype wearing, collecting, and trading these things that started off as mere sketches and designs from my head!

I can't spoil too much about it but I'm collaborating with an extremely talented sculptor on a Dota 2 collectible resin statue that's coming soon! (And no, it's not Timbersaw!)

When she's not playing Dota, you can find Lady Bane here: 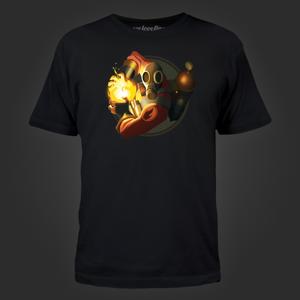 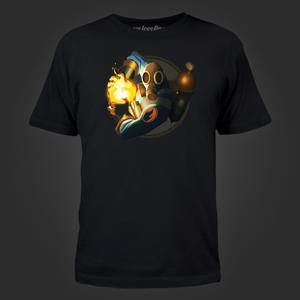 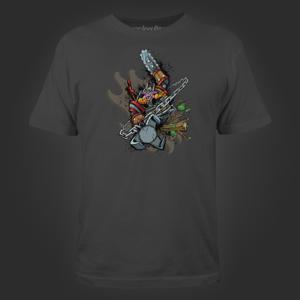 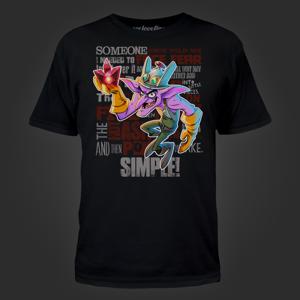 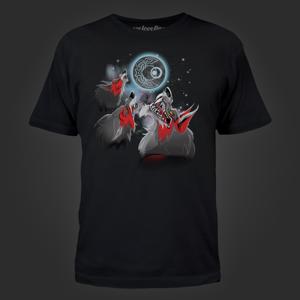 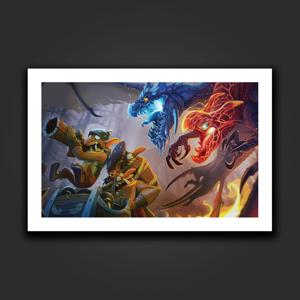 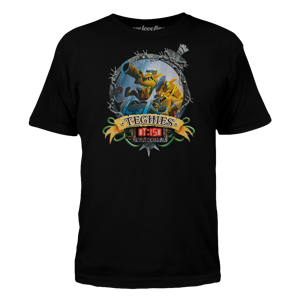